‘…now a piece of sun comes out again. I am happy… in another half hour the ‘Three Mariners’ will have undone their waistcoats. I shall drink beer with the portreeve, & no scrimping pussyfoot shall say me nay.’ –
Dylan Thomas, Laugharne, 1934

Laugharne from the air – Portmeirion eat your heart out!

Well. What a weekend! For the 7.125 billion out there who don’t follow this blog, let me tell you that last weekend was the most wonderfully edifying, life-affirming and ale soaked experience for many a year. To save me explaining what the Laugharne weekend is, take a look at the website here. Since I was booked to perform at this wonderful event by co-organiser and music promoter Richard Thomas, I admit to not sleeping much. This was due to the fact that it was my first performance of my show Sir Henry at Rawlinson End without my trusted band, save for one member, spoons and cymbals man Jonny Hase. The drive down there seemed never-ending and, bar a few wrong turns, was quite uneventful. It was very late when we arrived on the Friday, but even as we entered this small town under cover of its starless and bible-black sky, it was clear that Laugharne was somewhere quite special.

The English Congregational Church in Laugharne, referred to as ‘the chapel’ by the locals

After an evening of sober reflection, and even a good 15 minutes of sleep, Jonny and I made our way some 50 yards from our digs at the wonderful Three Mariners pub with its top notch staff and patrons, to the chill, squat chapel that was the venue for our performance that Saturday afternoon. I decided to get the stage set and get me costume on straight away, before the nerves made my hands shake so much that it would be impossible. After a very nervous run-through with our new best mate Ed the technician, we were ready. I had heard from Robin Ince on Twitter that he was going to get an especially early train in order to come along to the show, and Robin arrived just before we went on. To our delight he then got up and gave us a very warm introduction. This settled the nerves a lot. Then 1, 2, 3, 4 the strains of Aunt Florrie’s Waltz kicked in and we were off! 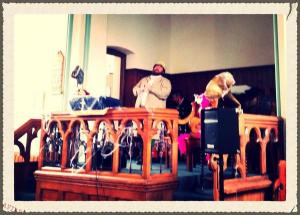 Me, hymning in bonnet and brooch

It was very odd to do the show in a chapel in broad daylight. More firsts, and as I looked out at the audience I picked out the face of Robin and sitting beside him I noticed Kevin Eldon and Graeme Garden!  Now, under most circumstances, having my work observed by 3 such accomplished chaps would lead to more blind panic, but this is work, and at all times when I am up on that stage, I have a responsibility to the audience to give my all and do my very best. That is one of the basic tenets of my working class upbringing. When people have parted with their hard earned brass for a show in good faith, they deserve value for money. Luckily I managed to keep my composure and did just that, and Jonny was marvellous too. Afterwards everybody seemed very pleased and said that they enjoyed it. WHEW! DONE! I chatted for a while with Graeme, Kevin and Robin after the show, and it was most gratifying to hear that they too enjoyed it. Indeed, Robin described the show in his blog thus – ‘interpretations of grotesque gragoyles of Britishness presented with bellowing & manic chutzpah.’ As you can see the chaps look most pleased with their Sir Henry badges and programmes. If you like the sound of all that then do follow the show on Twitter

I returned to my hotel room at about 5.30, feeling lighter than air as the pressure was now lifted and I could enjoy the rest of the fabulous Laugharne line up. This was meant to be for a shower and a ‘little lie down’. When I woke up it was 9.30 at night, I was so gutted as I’d missed both Richard Herring and Mitch Benn, however I hastily ran out and managed to catch a cracking discussion on horror with Robin and the master of macabre comedy Jeremy Dyson. Afterwards I ended up back in the Mariners talking to Laugharne’s ‘Portreeve‘ Phil, who informed me that he was the ‘top man’ in the town. As the great Dylan Thomas had written of drinking beer with the Portreeve, (obviously not the same one), this seemed rather fitting. We got chatting and my interest in history and tradition must have been obvious to him, as 5 minutes later he had been home to fetch the keys for the town’s Town Hall and the next thing we were in there. It was a bizarre experience to be clambering up the crumbling, web-strewn ladders of an ancient bell tower at half one in the morning, arseholed on Felinfoel Double Dragon ale, but it is one that I shall never forget! Fred Dibnah would be proud! Cheers Phil!

Amazingly I slept again that night and the Sunday passed by in a whirl of more Felinfoel Double Dragon ale and elation, (ale-ation?), as I had the good fortune to hear Stuart Maconie, Graeme Garden, Kevin Eldon and Robin Ince entertain again. Stuart told me that his Dad was from my home town of Haydock and had spent a lot of time there when he was a kid. I wonder if our Grandads knew each other? More delights came in the form of Kevin’s ‘Perfect Cousin’ character – poet Paul Hamilton – a truly surreal, intriguing, and very funny, Eldonian comedy creation that blurs the lines between comedy, tragedy and literature. Most entertaining, as was the Sunday evening spent supping in the historic Brown’s Hotel with Kevin, Graeme, A L Kennedy, Robin and Dr Alice Roberts.

At about 1am Jonny and I staggered back to our digs at the Mariners and just as I was putting the key in the door, the author John Williams, the other festival organiser, called Jonny and I over and told us we must come and do a number at Keith Allen’s gig at the Fountains Inn before the festival ended. It took us a nano-second to agree, and the next thing I knew I was onstage next to him, desperately attempting to remain upright on the piano stool, play the piano and sing. I did the best I could in the circumstances after a day of quaffing that Dylan Thomas himself might have been proud of, and the crowd went nuts and loved it. Keith too was fulsome in his praise and told me he was ‘blown away’. Result!

So that was it, aside from me n Jonny wandering around the castle and the beach eating chips, that was my Laugharne, a place that has the friendliest locals you could ever wish to meet. I want to go back there already! I shall give the last word to Dylan Thomas, the man who is the inspiration for this entire shindig, who said of the place….

‘…it is the strangest town in Wales… a mild beguiling island of a town… there is nowhere like it anywhere at all.’

Stuart Maconie with his Sir Henry at Rawlinson End programme